What a day. I didn’t get packed until after midnight. Not unusual. Woke up in plenty of time to finish. While finishing, I realized I forgot to grab the money for the 30 extra bags. So, I did that and still made it to the airport in plenty of time. But, when I arrived, I realized I left the team folder back in my office with all the flight numbers, names of team members, and releases from the organization we’re representing. However, due to a GREAT office manager, she delivered it to me in plenty of time and we’re good.

I needed some spending money, so I went to the ATM machine. Not sure if I couldn’t remember my passport or there was an error, but I couldn’t access my account. It said I didn’t know my password. And, it locked me out. So, I’m traveling to Russia with less than $20. 🙁 I guess I’m on a ‘serious’ budget. I do have credit cards, but I’d rather pay with cash.

The flight left on time, but we were short five team members. They were driving to Chicago to catch the flight from there. Unfortunately, one of the teams members forgot her passport in Grand Rapids. That’s at least a 3 hour drive. We needed a miracle.

One of our team members was able to convince the United Airlines ticket agent to convince an American crew member flying from Grand Rapids to Chicago — to carry the passport with them to Chicago. Last check — they agreed and we’re waiting to see if it arrives on that American flight.

Everyone MADE it!  Can you believe it?  The pilot on American Airlines was the first off the plane in Chicago. Chelsea was waiting for him. She saw 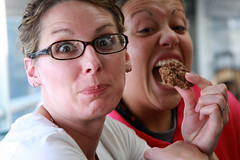 Katie and Molly are a little tired after a long frlight from Chicago to Frankfurt.

We were on-time to Frankfurt, Germany. Everyone was tired. But, that part of the trip was uneventful. The last leg took off on-time and we arrived on-time (actually about 5 minutes) early in St. Petersburg, Russia.

We all got to our hotel rooms by about 3:00pm and we all showered napped and had dinner at the hotel. It was a buffet style dinner. It was good.

Tonight, we’ll rest. Get up at 7:30ish. Eat breakfast. Then head out at around 9:00am to begin the heart of our trip in Russia.

my bricks
Get the latest news directly to your inbox Subscribe