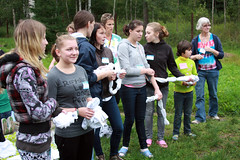 However, these kids weren’t in an orphanage this week. They were at summer camp. A place they spend more of their summer, away from the busy city life. This particular camp was a former boot camp during the Soviet days of communism. We were told this camp was over 50 years old. However, many of the buildings were brand new, including a nurses station and laundry facility. They have plans to keep this camp open all year long.

However, our job was to present Jesus to them in a way they would see it, hear it, and understand it.

We started the day with breakfast in the hotel like we always do. Then, the 29 of us got on a bus and headed about 90 minutes out of town to this camp. Unfortunately, the trip had a few surprises. First, there are a few people in our group who get car sick. Secondly, there are some people in our group who weren’t feeling real well and had to answer nature’s call in the middle of no-where. However, those were the only hitches.

We arrived at the camp mid-morning. We were informed most of the boys were away at a soccer tournament. That was a little disappointing 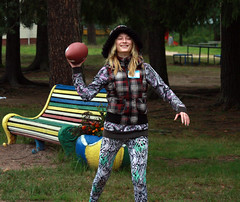 because we have four men in our group, all of whom wanted to show interest in these young men, something they don’t get a lot of. We also wanted to hold a basketball clinic. Unfortunately, there wasn’t much interest for that. So, instead, we just starting playing. We through American footballs, kicked the soccer ball, hit the volleyball around, and just ran and played.

Then, the teen group of our team took over. We split the kids up into groups. The first group played games, the second did tie-dye t-shirts, and the last group did a circle of trust. You get in a circle, blind-fold someone, and ask them to cross the circle with the guidance of someone telling you where the obstacles are located. These obstacles were sins written on paper and placed on the ground within the circle. The first time it kind of easy. Then you have people MOVING the obstacles as you try to cross the circle. Then, you have a friend help point you the way. It’s a picture of God using His Word to guide us.

After that, we had lunch at the camp. It was good. Soup, chicken, and potatoes. 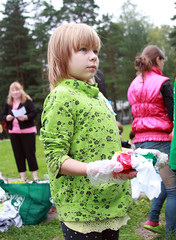 After lunch we played volleyball, made duct tape wallets and roses, gave the girls make-overs and ended the time with a skit which in mime form, addressed certain social issues facing many of these teens. It was presented in a compelling way that helped them understand they need Jesus. While I don’t believe Jesus has any difficulty saving us, I do believe when we struggle in our sin it appears to US the Jesus struggles to take us under His wing. The reality is, we have our idols that prevent us from having a relationship with Him.

The teens watched intently to the drama. Following that, Anna gave her testimony about the struggles she has in her life. I followed up by asking the question? If you follow God, are you afraid you’ll lose your freedom? Then I pointed out they’re not really free at all because they’re trapped in their sin. They can’t escape it without Christ. They can try, but they’re slave to their sin and only Jesus’ death on the cross for evil people can rescue them. It’s His work ALONE on the cross saves us.

I think they heard. I’m praying seeds were planted and much fruit will come from them.