We’re all orphans, so why shouldn’t we help?

Today was a day I’ve been looking forward to since I we first planned on coming back to this region last winter. Why? Well, today we were starting to visit orphanages where I had developed a few relationships with the children. Those relationship developed in a few short days. I was hopeful that at least one or two of the children I had met were either still at the orphanage, or they had either been adopted or reclaimed by their family.

What I was about to discover was a bit overwhelming.

We got up at about 7. We had to have breakfast and be ready for the bus ride to Zelenegorsk, Russia. That’s where we’re staging the rest of our visits. The rest of the orphanages we’re visiting are out a camps near the Gulf of Finland.

It was about a 90 minute ride. We drove straight to the camp where orphanage 46 children were attending camp. As we arrived, I started seeing kids that I didn’t expect to see today. We’re were planning to see kids at orphanage #2 on Wednesday. 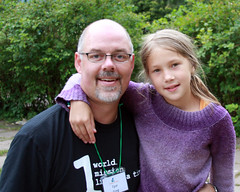 Greg Yoder and Sveta. We met last year at summer camp. Sveta has two brothers, but hasn't seen either for over a year.

However, first I saw Sveta. She was at #2 last year, but the kids move a lot, so I figured they must have moved her. Then Chelsea about got hugged to death by a young lady she had befriended last year, Elya. She’s now 15. Then Sasha and her brother. All of these kids from #2. I kept asking about the two kids, Nastya and Eleena, who I had taken an interest last year. Nastya, because that’s my daughter’s name. And, Eleena because she wasn’t liked by very many kids.

But, all the kids were telling me that Eleena had been adopted by a family in the United States and Nastya was gone. Nobody knew where she was.

So, in the morning, we spent time playing games with the little ones. I had two little girls, Sasha (11) and Sveta (9) around me most of the morning. We played games, heard stories, sang and just had fun.

We left for lunch. Since we came right to to camp, we decided to check into the hotel, eat lunch, then head back to the camp. Everything went smoothy. And, we arrived back at camp with many children anxious to get started with more fun.

Since we have such a large group, we have to travel in shifts because our bus isn’t large enough to take everyone. Since I was on the first bus, we basically kept the kids busy until the others join us. However, while I was playing with some of the kids, I see Sveta walking into the play area with this very blonde, very fair skinned little girl. I did a double take. It was Nastya. 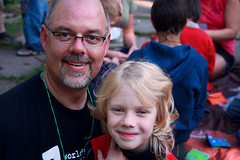 This is Nastya. She's visited regularly by her parents, but they've lost their parental rights, but won't let them be adopted.

When she saw me, her eyes got really big and ran and gave me a big huge hug. She called me ‘Grug’. I asked her why she was there. Long story short, there were several different orphanages at this camp. There’s was just one. So, not only did I get to see almost all the kids I had hoped to see, we got more than one orphanage at one camp. That means all the more ministry.

The interesting thing about many of these kids, they can’t be adopted. Nastya is just on example. Her mom and dad have had their rights terminated. However, they won’t give up their rights so their kids can be adopted. So, rather than shape up, they continue living the way they do and don’t care about their kids. Nastya’s mom and dad come by regularly. However, they have no desire to get her and her brothers back.

Following our first day at the camp here, we went back and ate dinner, then wrapped up our day with devotions on the beach at the Gulf of Finland.

We didn’t see anyone come to Christ today, but there were seeds planted, friendships rekindled and progress made.

It also made me realize that when you look at it, we’re all orphans. We’re all fatherless, apart for Christ. But, because He loves the unlovely He sent his son Jesus to die for us. As he reaches down and selects us as his ‘slaves’, we become His. He selects us, purchases us, tells us what to do perfectly and makes us His heir. And, not only is he our master, but He calls us friend. What a great place to be.

Keep praying for the team.

You can see more photos of the trip by clicking here.