What a dramatic difference between Wednesday and Thursday.

First, let me apologize for not posting anything on this blog yesterday. I got everything done — pictures uploaded, video made and scripts written — only to realize the time on my internet card had run out. Unfortunately, no free wifi in Russia. At least not at the hotels we’ve been staying in this week. So, this will be two updates in one. 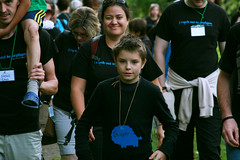 Sergey is a wonderful little boy. We met him last year.

Yesterday, we got up at the same time, ate breakfast and headed in teams to Orphanage Camp #2. This is the camp where we had so much fun last year. We really connected with a lot of the kids. And, it was great to see so many of them again this year. It wasn’t good they were there, but it was fun seeing them grow and seeing them laugh.

When I arrived, we walked back to the field where we would be holding our vacation Bible school program. We basically did the same activities we did at the previous day. However, when we made the circle to begin the day, my little friend Sveta walks up and hands me a piece of watermelon. I’m not sure, but I think it was a part of her breakfast. What a thoughtful, loving little girl. I made her eat it. I told her I had already eaten breakfast and she needed to eat it.

After singing a few songs (in English), we broke up into groups. Craft, recreation and memory verse. I went to recreation. Why? Not sure. Knees my age aren’t supposed to be there any more. I may have to start volunteering for crafts in the years ahead. 🙁 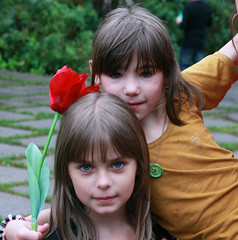 It started raining in the afternoon, but despite the rain, we went ahead and did “The Everything” for the teenagers. If you haven’t seen it, click here.

Following the skit, Melissa Blough gave her testimony and I presented the Gospel. Following the skit, there were a few who had questions about it. One girl who will leave the orphanage was challenged by Masha, one of our interpreters, about what she’ll be doing with her life. Many of the boys in the group got very quiet, reflecting on what they had seen and heard. While no one made professions of faith, we were seed planters.

As we got ready to leave the camp, I got the shock of my life. A teen girl who befriended one of our team members last year, pulled me aside. Through an interpreter asked some questions about adoption. I’d like to ask you to pray for this girl we’ll call Ella. She came to Christ last year during camp. She just needs a chance. Pray God will give her one either through adoption or a Christian mentor program.

Today, was a different day altogether.

The camp was cold in every way — emotionally and spiritually. Kids in this camp were actually displaced by a fire. It was in their living area. So, 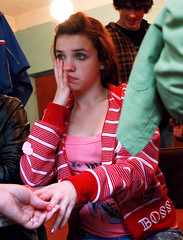 they were in strange surroundings. When we arrived there wasn’t the typically running beside the bus yelling and screaming. Children weren’t playing happily. There was just a dark cloud.

This was the camp last year where the director has taken our gifts to the kids and took them for himself. The man run his orphanage like a boot camp. There’s much anger and little love. When we walked in the kids hardly even noticed we were there. We organized some duct tape crafts and dream boxes. One boy took his box, threw it out the window and said he was making believe that it was a bomb and he was a terrorist.

While, discouraging, we were able to present the skit. I was able to talk about the fact that they’re either a slave to sin or Christ and that in reality, we have NO freedom. I told them that Christ died for unlovely sinners. He gave His life for people that are actually His enemy. I said it didn’t matter the sin, it was paid for at the cross.

There wasn’t much, if any, response. But, they DID listen. Again, we’re not called to save people. We’re just called to preach the Word and be faithful. God will provide the increase. I’m praying God will protect these kids for angry caregivers and that he’ll replace this unfriendly, unkind director with someone who actually loves the kids.

Pray for the kids as they return to the orphanages next week.

We’re all orphans, so why shouldn’t we help?

We’re all orphans, so why shouldn’t we help?
Get the latest news directly to your inbox Subscribe