Nigeria (MNN) — Boko Haram, an Islamic terror group linked to al-Qaeda, continues their rampage in Nigeria. Radicals attacked security personnel earlier this week, killing more than 30 people. That brings their casualty toll to at least 470 since kidnapping hundreds of schoolgirls earlier this month and sparking international outrage, according to Reuters.

Jason Woolford with Christian Resources International says only the Word of God could change the Boko Haram. That’s why CRI is packing up approximately $1 million worth of Bibles and Christian literature.

“We have another two sea containers sitting in our facility, awaiting sponsorship to get to our distribution center in Nigeria,” says Woolford.

Can you help God’s Word reach Nigeria? Sponsor a container of Bibles and Christian resources here.

Once the containers arrive in Nigeria, CRI missionaries will start handing out the resources, completely free of charge. Since beginning their distribution center in Nigeria last year, CRI and its local partners have given out $1.5 million in Bibles and Christian books. As people read Scripture, their lives begin to change.

But following Christ also comes at a price. A CRI missionary and head of the Nigerian distribution center also pastors a local church. He tells Woolford about a young believer who was targeted by Boko Haram.

“Because of his faith, his new-found faith, his hands were cut off and his chest was set on fire,” Woolford recounts.

CRI was able to give him resources “so he could read about the very God he’s being attacked for,” Woolford adds.

“We’re going to give a live update on some of the things that we’re doing” says Woolford. You can also “be a part of donating to what we’re trying to achieve.

“There are a lot of good things and a lot of good deeds that we can do as Christians. But I don’t see what’s more important or more powerful than sending God’s Word to people.” 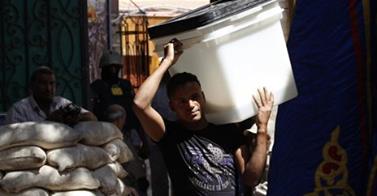 Low turnout: mandate of the people?

Low turnout: mandate of the people?
Get the latest news directly to your inbox Subscribe