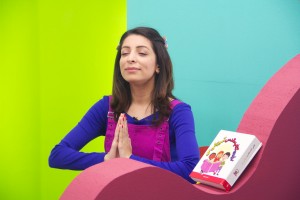 Middle East/Central Asia (SAT-7) — Children in Farsi-speaking nations are especially vulnerable–many considered the property of their parents with few legal protections. They suffer the consequences of high divorce rates, parents’ drug abuse, and other social ills.

Many Farsi television programs deliberately or inadvertently promote hatred, conflict, and even domestic violence. SAT-7 PARS provides an alternative to these negative influences through programming that promotes healthy values and attitudes.

“PARS” means “Persian,” referencing the heritage of the region’s people: Iran, western Afghanistan, and some of Tajikistan. This Farsi-language channel broadcasts Christian programming every day for 24 hours, including children’s programs, and hopes to increase this number in the coming year.

Smile is the newest live kids’ program to join the channel.

Smile aired its first episode on November 29 with the topic, “You are special to Jesus.” Children learned that they are gifts from God and that He has made them loveable. During the one-hour live show premiere, almost 300 children and parents called the studio! The following episode focused on “Why we should love others.” 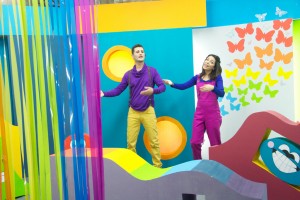 A bold rainbow theme inspired the set design and is a subtle reminder of God’s promises. Hosts Parastoo (right) and Pendar (left) mimic disagreements and ask viewers’ advice, teaching them to mediate and resolve conflict. A funny scientist segment teaches kids about the wonders of God’s creation. A segment called “This and That” compares two twins, one being thoughtful and neat while the other is careless and messy. “This and That” teaches children the value of being respectful and mindful of others. Parastoo and Pendar also lead the children in songs and prayer, teaching them how to communicate with God.

Kiaa Parsa Aalipour, the producer of Smile, hopes to present simple yet meaningful biblical truths through the season: “We would like to send a message of hope to the children of Iran, Afghanistan, and Tajikistan. We want to tell them, first, that we love them, and more than us: God loves them…. We are trying to tell them that happiness is important, especially happiness that comes from the Lord.”

Want to make a difference? Your gift today of $10 reaches 10 viewers for one year.