The United Nations voted Thursday to send French and African troops in an attempt to restore stability.  The U.N. estimates that nearly a tenth of the population–roughly 400,000 people–have been displaced by the increasingly sectarian violence.

Now, there are various reports indicating that Christian militias are raging through Muslim neighborhoods, fighting gun power with makeshift weapons. Open Doors USA President and CEO David Curry explains, “Some people are seeing Christianity as a political movement. It’s causing problems, so, yes, there have been some Christians who have responded with violence. That’s why it’s such a tinder box right now. It could become a very unstable situation and escalate into genocide.”

It’s a messy continuation of a coup in which President Bozize was ousted earlier in the year. The capital city fell in March, and since then, the scrabble for control has been bloody, fierce and brutal. Curry notes the dividing lines were drawn because “they felt like the Christians were too closely associated with the previous regime. So now, you have a political and a social reason for folks to bring their religious differences to the surface.”

Open Doors USA notes that since the rebel take-over, CAR has been dumped in anarchy as the Seleka coalition fell apart and warlords and militia took control of every corner of the country. They have carried out atrocities amounting to war crimes mainly against the Christian population of CAR. Curry says, “What it has meant is that Muslim forces have been attacking Christian churches and people and individuals who are known to be believers, and it has gotten to be very, very dangerous.” 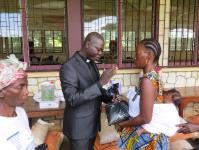 As the crisis deepened, it seemed the international community was looking the other way. Curry notes that the situation has taken its toll. “It makes it very difficult for people to share their faith. They begin to worry about attending church. It makes attending church very, very difficult, if not impossible. There are all kinds of ways that it affects the normal expressions of worship.” What’s more, the local Church felt isolated from the wider Body of Christ.

But the hope that fueled the Church unity at the conference stretched thin as refugees struggled with hunger and malaria, flu and cholera. During Open Doors’ visit to Bangui in October, teams delivered some much-needed emergency relief to 38 families.  Relief packages consisted of food items like rice, flour, oil, beans, sugar, salt, dried fish, tomato paste, and spices. They also contained soap, lotion, basic medicines, and powdered soap. Curry clarifies the reason they do this. “We connect with the churches and the pastors there. We are meeting with them on a regular basis, basically daily. We try to help rebuild the Christian community and make the community a central point for support.” 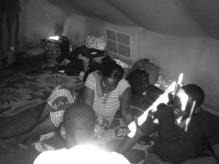 The Church in CAR is faced with many varied challenges. “Prayer is a central part of this. We need folks to begin to pray for the Central African Republic believers,” urges Curry. In the first quarter of next year, Open Doors is initiating a prayer campaign for CAR to continue their commitment of standing with them over the long haul.

Thank the Lord for each opportunity to make a difference in CAR. Pray that their efforts will continue to remind Christians that they are not alone. Please continue to pray for the launch of a UN peacekeeping operation in CAR.

Who will receive a life-changing gift in India?

Who will receive a life-changing gift in India?
Get the latest news directly to your inbox Subscribe