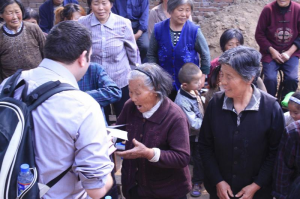 China (MNN) – This last story of our trip to China is more blog than anything else.
What follows are the observations I made during our time in China as well as those of my 15-year old son, Matthew Bliss, who is with me on his first mission trip.

To get scope, let’s look at I Corinthians 12:12-14 and 27-31 with regard to unity and diversity in the body of Christ…and just in case you don’t have those passages memorized, here they are:

Just as a body, though one, has many parts, but all its many parts form one body, so it is with Christ. 13 For we were all baptized by[c] one Spirit so as to form one body—whether Jews or Gentiles, slave or free—and we were all given the one Spirit to drink. 14 Even so the body is not made up of one part but of many…
27 Now you are the body of Christ, and each one of you is a part of it. 28 And God has placed in the church first of all apostles, second prophets, third teachers, then miracles, then gifts of healing, of helping, of guidance, and of different kinds of tongues. 29 Are all apostles? Are all prophets? Are all teachers? Do all work miracles? 30 Do all have gifts of healing? Do all speak in tongues[d]? Do all interpret? 31 Now eagerly desire the greater gifts.

There are lots of arguments that surround the above-ground Church (China Christian Council/Three Self-Patriotic Movement) and the underground Church (house church) movements.

Each has its strengths and weaknesses. Together, they are a formidable part of the global Church.
We started our trip with a visit to Amity Printing Company to see what’s being done to address the need for Bibles in China. We heard about the vision to increase accessibility.

Later in the week, we were part of making God’s Word available to the Church that represents China 2, the rural part of inland China where poverty is more the reality for families (China 1 represents the bigger cities in the east coast where there is a concentration of wealth).

As guests of the Chinese Church, we learned what it means to serve the above ground church, celebrating and observing all that they are doing in the Great Commission. We also saw the hope in this statement “Because we may not be able to do it today, does not mean we can’t do it tomorrow”. Despite the challenges facing the Church, that saying speaks to the indomitable will of these pockets of believers to live as Christ.

Between the four teams,  <a href=”/mission_groups/bibles-for-china/”>Bibles For China </A>helped the China Christian Council deliver 6,000 Bibles this week . Keep in mind that our team visited village churches that had never hosted foreigners before. We were the first they’d seen. Our team leader, Barry Werner is a 60-something German man, well over 6’ tall and obviously not Chinese. Aside from our interpreter, Summer, Matthew and I made up the rest of the team. We are Chinese American, speaking almost no Chinese at all.

Still, Matthew was very popular among the youth in the churches we visited, sometimes 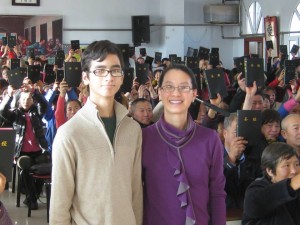 because he was new, sometimes because he was American, but nearly always because he represented his youth group from First Baptist Church in Spring Lake, Michigan. His presence and the generosity of our church’s children (ages 5-18) gave the church leaders renewed energy in developing outreach programs for young people.

The churches are doing all they can to keep the youth engaged with their faith, but it’s an uphill battle due to the urban sprawl happening around so many of these former agricultural villages. That actually turned into one of the prayer requests that stuck out for him.

Another thing was how many of the elderly were so grateful for a personal copy of God’s Word. Matthew observed, “These people come from a time where, if you proclaimed you were a Christian, you would be sent to what they called a ‘re-education camp’. It was pretty harsh. It was during the Cultural Revolution and it’s like a dream coming true for them.”

And then, there’s the concept of hospitality—the guanxi that is all encompassing in the hospitality of believers in China. It’s all about ‘first, make friends, then do business’ and these believers are investing in the relationship of a lifetime. It works, too, according to Matthew.

“Looking back on it all, the hospitality of these people, who don’t have that much to give, save up and they give for you anyway. It’s very humbling to see the things that happen.”

Our team will close the trip out with a short visit to some of the most historical monuments in China. While it sets the stage for the grandeur and longevity of China’s culture, that’s not the thing that Matthew will take away. He says, “It is going to be life-changing when I get back to the States. Here in China, we’re just doing the work of God. Plain and simple, that’s what the Great Commission is; it’s what we’re supposed to do.”

Disasters piling on, one after another

Disasters piling on, one after another
Get the latest news directly to your inbox Subscribe