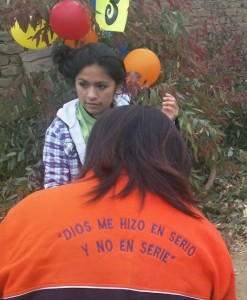 Peru (MNN) — Home to several national festivals and events, Trujillo, Peru is a coastal town located in the country’s northwest La Libertad region. The city is home to a large arts community and has also been called Peru’s “Capital of Culture.”

Paul Wiegert and his family began serving in Trujillo with The Mission Society this January. He says God’s intentions for marriage and family clash sharply with Trujillo’s reality.

Men have different families in different cities. Wiegert says there are no rules or regulations regarding work hours, so Trujillo men often work between 10 and 12 hours a day, six days per week. Some of the men served by Wiegert’s churches travel three weeks out of the month, bringing them away from support systems and into new temptations.

“The men are gone to another city; they’ll meet another woman and have a family there,” Wiegert explains.

“It’s a very odd thing. You’ll have a woman with several kids here that a man will be responsible for, and then in another town, he’ll have another family.”

It’s not that marriage is opposed or outlawed. For many families, it’s simply not an option. Civil ceremonies are too expensive, and churches aren’t authorized to perform weddings.

Another challenging reality for the Church is the bounty of 14-year-old girls who are getting pregnant on purpose.

“They’re babies with babies,” says Wiegert. “It’s not for love, it’s not for anything; it’s just for the fact of someone who’ll take care of them, who’ll support them, who’ll provide food and shelter.”

Wiegert explains that women often have many mouths to feed with little money, and even fewer job skills. Older girl children, some as young as 14, are encouraged to move in with older men who can provide care. But when her husband is away working or traveling, she’s left to fend for herself and their child.

And, the cycle begins all over again.

Paul and wife, Kelly, are trying to break this destructive cycle in Trujillo with God’s Truth and love. They currently oversee four church groups, where Christ is introduced through relationships, Bible studies, and discipleship.

Education and encouragement are the only effective paths to transformation they’ve found, says Wiegert.

“Education on what God’s Word says. Education on what family looks like, and the structure of that…self-worth, for women…reaching out to the men and building relationships with them [for discipleship purposes],” he expounds.

“The church provides the materials, and then as they make something, they sell it and give 10% back to the church,” Wiegert explains.

Pray for the Wiegerts as they proceed with buying land to put a church building on. Pray that God will keep opening eyes and hearts in Trujillo to the Truth of His Word. Pray for transformed lives as Scripture takes root.