Mozambique (ASM/MNN) — The clock is ticking down for the staff of Audio Scripture Ministries.

The team in Mozambique has until June 30 to edit and finalize the Takwane New Testament recording project. A Wycliffe Bible translation team is working on finishing the books of the Old Testament. Pray for good communication between everyone involved and that consultants will be available to finish the remaining books.

In the meantime, the recording techs have to edit the nearly 42 hours of recordings. Two Takwane readers spent three weeks recording at the ASM studio in Southern Mozambique. During these three weeks the entire New Testament as well as Genesis and Exodus were recorded.

Pray for the staff of the studio in Mozambique as they now load these players for upcoming distributions. The team is prepared for long days ahead in the studio to finish this project by the deadline. Please be praying for the Takwane speakers as they review the edited audio one more time to make sure there are no mistakes. 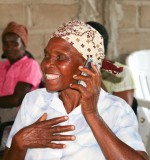 The Takwane of Central Mozambique have a population of 116,000. They are part of the Bantu, Makua-Yao people cluster, unique to the country. Most of the tribal group follows the ethnic religion, which is deeply rooted in a people’s ethnic identity.

According to notes from Operation World and The Joshua Project, conversion essentially equates to cultural assimilation. Less than 2% are evangelical, but there evangelism and church planting efforts have been growing within the past two years. To support that, ASM is readying audio Bibles to help. 1,760 devices just arrived in country.

Click here if you want to find more details.