Taking the ‘next steps’ in La Gonave

Haiti (MNN) — On January 12, 2010, a 7.0 magnitude earthquake brought a new level of devastation to the Western hemisphere’s poorest nation. It took next-to-nothing for the quake to destroy approximately 250,000 residences and 30,000 commercial buildings. 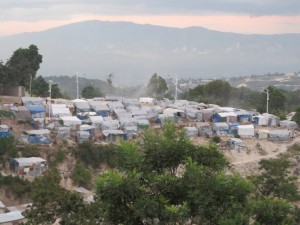 “One of the horrible consequences of the earthquake in 2010 was that people lost their homes,” says Starfysh founder Dr. Steve Edmondson. “If they survived that earthquake, they fled their homes to live in places that wouldn’t fall down on them.”

Around 1.5 million people abandoned the rubble of their former homesteads and set up shelters using whatever material they could find: towels, clothing, branches, etc. These communities soon became widely known as “tent cities.”

Edmondson met the inhabitants of one tent city situated atop a hill on the island of La Gonave in 2010. He was helping out at La Gonave’s Wesleyan hospital a few weeks after the earthquake struck.

“They were tents of sticks and clothing and things that would semi-stop the rain from falling on them at night,” Edmondson says, describing the shelters. “Starfysh generated a little money, and we sent tarps up there.”

Fast-forward nearly four years, and nothing has changed. Edmondson made this observation during a recent visit to La Gonave.

“It moved me in a lot of ways,” he states. “One was just pity and the natural emotion. One was a little, frankly, disgust — why would they still be there four years after?”

Edmondson pursued answers to this question by taking a trip up the hillside to the settlement which houses nearly 150 families.

“I got there at daybreak; I wanted to see everybody there before they took off, doing whatever they do,” says the Michigan doctor. “People were very gracious with me; they invited me inside their little homes.”

As he visited with people, he asked the questions haunting his heart: Why not move? Why not go further down the mountain, where life is a little easier? 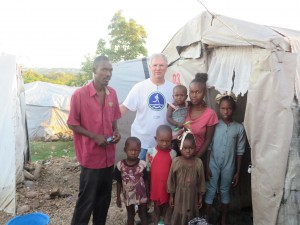 Edmondson visits with one of the families in La Gonave’s tent city.
(Image courtesy Starfysh)

“They just looked blankly into my eyes and didn’t know how to answer that question. They feel so stuck because they have nowhere to go,” Edmondson recalls.

“What do you do? What do you say to somebody like that?” he asks. “I guess I relearned, I was reminded, how difficult it is.”

Edmondson says he’s also reminded of the stark contrast between his life and the life of those Starfysh is serving.

“While I…get up and make my coffee and head off down the highway to work, they are waking up after having been rained on during the night; the floor of their little 8×10 tent is wet dirt,” says Edmondson.

Tent cities aren’t exclusive to La Gonave, a small island off of Haiti’s mainland and the primary focus of Starfysh.

There are approximately a quarter of a million “people in Haiti still living in camps like this,” says Edmondson. “It just seems so wrong, and I feel so helpless, [not] knowing what to do.

But, “it starts by just showing up, and seeing what happens from there,” he concludes.

How can Starfysh help the Haitians who live in this hilltop tent city?

“That’s the question of the hour,” Edmondson observes. “It’s obviously not easy; otherwise they wouldn’t still be there.

“We can talk about long-term solutions, how [we can] make this never happen again, etc. But these people are waking up today without clean water.”

During his tour of the tent city, Edmondson learned residents must trek a mile down the hill to draw water from a public fountain.

“That water is filthy, dirty, and stinks,” he says. As a result, many have cholera, and many are dying from this curable and fully-preventable ailment. 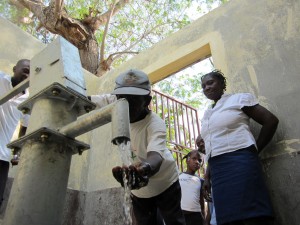 Clean water is a simple solution to the disease killing thousands of Haitians each year.
(Image courtesy Starfysh)

A lack of bleach and medical professionals are only making the problem worse in La Gonave. When people from the tent city suspect they have cholera, they visit the settlement’s sole medical center for diagnosis.

“There was a young man who said he was a doctor, but he wasn’t. He was a student of some sort,” says Edmondson. “[He] would give oral rehydration solutions but not have a drop of Clorox bleach there; that is the immediate solution to clean a bucket of water.”

Common household bleach, such as Clorox, contains a chlorine compound that will disinfect water. Relief teams responding to a natural disaster will often hand out Clorox packets to survivors so they can kill the bacteria in unclean water.

Edmondson immediately called for 10 gallons of Clorox bleach to be brought from the Starfysh ministry center to this makeshift medical tent. It’s a temporary fix, and Edmondson thinks personal water filters are the next step toward a permanent solution.

“That would be pretty easy to do, and I’ve already made some phone calls to hopefully make that happen next month,” he says.

Starfyshʼs singular mission is to bring holistic, sustainable transformation to La Gonave. As Edmondson and La Gonave team members formulate a sustainable plan for getting clean water to the hilltop community, they also grapple with immediate needs.

“There’s an ongoing tension…between dealing with the immediate situation and thinking about longer-term solutions,” notes Edmondson.

“We can’t ignore people who are dying today…just because we’re too busy creating the structures for tomorrow.” 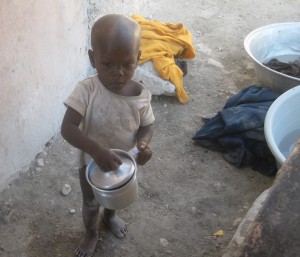 The needs in La Gonave are never-ending.
(Image courtesy Starfysh)

“The needs are so great, and they’re not theoretical: they’re real,” states Edmondson. “The little kids rub their bellies and have their hands out, saying they’re hungry. It’s an all-day struggle with balancing the immediate needs with the longer-term solutions.

“I think we’re compelled to respond to the now and to the immediate, because that’s where God’s love is made plainest.”