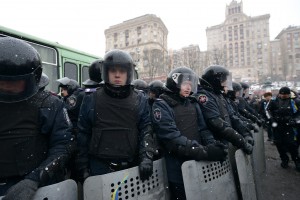 Thousands of demonstrators have been camped out in snow-covered Independence Square for days, angry about the refusal of Ukraine’s Russian-allied President, Viktor Yanukovych, to sign an agreement that would strengthen cooperation with the European Union.

Late Wednesday, police used force as they swept through the Square in an effort to clear it of demonstrators. Undeterred by the crackdown, by dawn protesters had rebuilt barricades.

Slavic Gospel Association spokesman Joel Griffith says although the situation is fluid, “Police appear to have actually abandoned their attempt, for the time being, to dislodge the protestors from Independence Square and some of the other places they’re at in Kiev.” 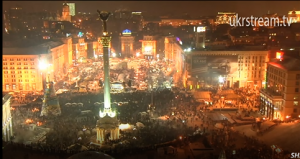 It also prompted a chorus of condemnation from Western leaders. The United States Department of State issued a statement expressing its “disgust with the decision of Ukrainian authorities to meet the peaceful protest in Kyiv’s Maidan Square with riot police, bulldozers, and batons, rather than with respect for democratic rights and human dignity. This response is neither acceptable nor does it befit a democracy.”

The statement went on to say, “We call for utmost restraint. Human life must be protected. Ukrainian authorities bear full responsibility for the security of the Ukrainian people. As church bells ring tonight amidst the smoke in the streets of Kyiv, the United States stands with the people of Ukraine. They deserve better.”

Griffith adds, “From the perspective of the churches there, our brothers and sisters are very concerned that this doesn’t turn into violence and bloodshed. It really is a very dangerous situation right now, and we’re in a lot of prayer over it.”

SGA’s regional ministry center is in a suburb of Kiev. Their function is to come alongside the indigenous church with support and resourcing. However, the latest developments have been unnerving, admits Griffith. “The concern that they have of course, if this violence escalates, and you begin to see these sorts of political crackdowns, where does it end? They certainly don’t want to see violence or bloodshed on any account, but if this ends up somehow causing further restrictions on access, restrictions on freedom, who knows where it would lead?” 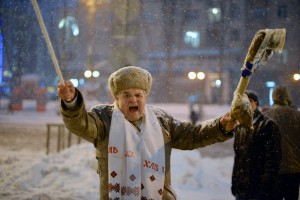 Past history of the region bears out those concerns. Crackdowns on protestors sometimes lead to crackdowns on anything the State sees as a potential risk, especially after a period of revolt. Griffith says believers are wondering, “Would this, in turn, lead to an eventual crackdown on the churches? Would the government see the Church as some sort of threat? It remains to be seen.”

There still is religious freedom in Ukraine, but the instability creates concerns for community access. SGA hopes to continue their work in supporting the local churches. For that reason, Griffith says they’re praying for cooler heads to prevail. “Pray that the churches would be protected, because they certainly don’t want to be caught in the middle of a political fight. They just want to focus on their ministries and preaching the Gospel.”

Want to see what SGA is doing in Ukraine? Click here.