Feeling ‘used’ in a good way 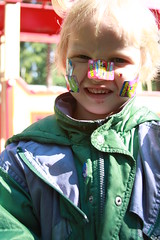 There are days when you feel inadequate. Then there are days you KNOW you made a difference, even if it was a subtle difference. Today was that day for many of my teammate on the Orphan Outreach trip to Russia this week.

The reason for my delay was uploading video from the previous day. 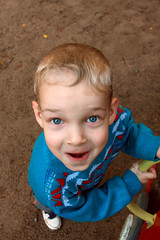 However, today, we were heading to our final stop at Orphanage #40. This orphanage is for children with eye issues — at least ‘officially’. However, there are MANY other issues, too. Cleft lip and pallet, down’s syndrome, severe fetal alcohol issues and the like.

We arrived at the camp along the Gulf of Finland at around 10am. We walked into the woods to a secluded camp setting. There was on newer building that looked like a long motel that you’d see in the U-S. However, the other buildings were wooden structures far enough apart that it takes a little time to walk from building to building. 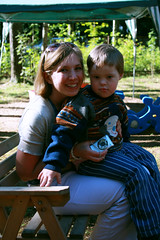 I started off with the most functional kids. These 12 or so children were those who had eye issues, but we high functioning. Almost all of them were 6 years old. These children listened so well. They did crafts, putting fish stickers on a fish tank looking piece of blue foam. They shared the creation story and they all listened.

The second group of kids, the largest group, of about two dozen kids were those younger and a little less functioning. They were kids with down’s syndrome and fetal alcohol issues. However, most of them could communicate, but they couldn’t control themselves. This group was able to do the craft, but that’s about it. This was the ‘super charged’ play group.

Then, the final group of kids were those low functioning — Down’s syndrome children, fetal alcohol, and other disabilities that require hands on attention.

I visited each group this year. The first group, there was a little boy with my name Gregori, or Gresha. I got a chance to talk to him. He seemed proud that we had the same name. I was able to watch them do their craft and tell a Bible story. It was great to see the happiness on their faces.

We finished with them at around noon, boarded the bus and headed back to St. Petersburg for lunch.

Our next to the last night devotions were really sweet. Ellie shared from the Word, but many more people talked about what God is doing in their lives because of being on the trip. It was a great time of sharing.

Our night ended at McDonald’s. Most got ice cream and just hung out laughing. We’ve done a lot of that on this trip.