Another vote is scheduled for Malians 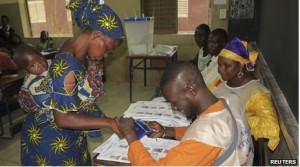 Low numbers turned out for the parliamentary election on Nov. 24th (Photo Courtesy of BBC)

Mali (MNN/WRN) — Last week many Malians set out to vote.

The country is attempting to switch to a democracy to combat Islamist militants.

Parliamentary elections were held under heavy security. According to government numbers, the turnout only reached 38.4%, much lower than expected. BBC news states that many people skipped out because they were not happy with the process. Since presidential elections were held in August, violence and social unrest have surged. Tuareg rebels, allied with Islamist group linked to al-Qaeda, are still active in the north. In some cases, they prevented people from going to vote altogether through violent means.

Because of the low turnout, the results of the election were inconclusive. Another vote is scheduled for December 15.

World Renew has a firsthand view of the condition in Mali.

Over 350,000 Malians have been displaced from their homes due to a violent internal conflict that has been ongoing for over a year now. Approximately 200,000 people have fled to communities nearby, while over 150,000 people have crossed into neighboring countries in search of protection from the fighting. Most of these families have lost their homes and their livelihoods.

World Renew is responding by supporting the efforts of local communities within Mali and in neighboring countries to assist the displaced families with access to food and livelihoods support.

On January 11, 2013, the conflict in Mali escalated when French and international forces arrived to support the Malian army in fighting Islamic insurgents. African Union troops also arrived to support this military intervention. The fighting was concentrated around areas occupied by al-Qaeda in the Islamic Mahgreb (AQIM), who had taken control of several major towns last April in an effort to establish an Islamic state.

World Renew is currently working with local organizations in neighboring countries to provide a three-month supply of millet to Malian refugee families.  World Renew is also providing families with goats and goat feed to allow them to produce food and generate income as they wait for the fighting to subside in their home country.

As more and more families are forced to flee, the need for financial support is ongoing.

These people have been torn from their homes, and there is a long way to go in order for peace to be found. World Renew has an opportunity not only to give these people comfort and hope through food and shelter, but also by sharing the Gospel.

If you would like to help financially, click here. Please pray that the elections will remain peaceful on the 15th. Pray that as these people seek to shift their government, they would see God’s hand working in their nation.