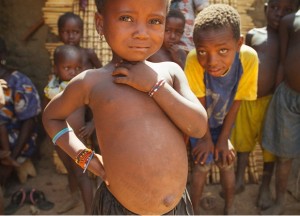 Burkina Faso (MNN) — Your child is sick to his stomach, and he’s not getting better. Even though you hate to see him in more pain, you bring him to your local witchdoctor. You know of no other option. The witchdoctor has you hold your son down while he takes a razor and slashes his belly several times. He then rubs bits of termite into the wounds.

This “medical” practice is commonly used in Burkina Faso. The Dagara people believe that the stomach ache is caused by a spiritual curse. Paul Darilek of Living Water International says, “It’s all just completely unnecessary because the root of the problem is bad water.”

According to Darilek, the practice is still all too common: “If you’re around a group of Dagara people and there are five kids with their shirts off, either two or three of them have scars all over their bellies. Sometimes it’s five cuts, sometimes it’s 30 cuts, up and down their belly.”

The tiny country is very poor and is at the bottom of many poverty indicators. “It’s a completely non-literate culture. Most Dagara people in Burkina Faso don’t know about writing, they don’t even know they’re speaking a language that can be written on paper,” Darilek explains.

But things are turning around for Burkina Faso, and it started even before LWI was asked to help. Three Christian families graduated from a university in Texas and decided they wanted to minister to an unreached people group that would be receptive to the Gospel. The Dagara people were unreached and open to what they Christians had to say. The missionary families moved in, learned the language, and spent two years sharing the hope filled message of the Gospel. Because there is no written word in their language, the Bible was shared by story. Many churches began this way.

“This caught on. It’s one of the most vibrant church-planting movements that I’ve ever seen. There were Africans planting churches all over the place, and it grew and grew. They recognized that one of their biggest needs was water.”

And that’s when LWI was invited in to help. Now, they are training the Dagara people to rehabilitate wells, and in some cases, build new ones completely. These people partner with the leaders of the indigenous churches. Derilek is especially excited when the Gospel comes into play: “People say, ‘How did that come about? That wasn’t a government project; what motivated that?’ And that’s a door-opener for us, to be able to talk about the God of all things who’s restoring everything.”

Among belly cutting, the villagers will also take treatments that include wearing string and amulets. The churches are able to lovingly explain that the expensive practices of the witchdoctors are ineffective and often dangerous. They have proof to back up their claims. “Living Water goes into one of these villages and partners with the local church leader, provides new water, clean water.” They also provide “education about hygiene and sanitation through the local church, and then everybody observes, ‘Hey, wait a minute: now that we’re drinking this water, our kids aren’t getting those stomach aches. It wasn’t a spiritual curse.’”

Presenting safe water while sharing about the true Living Water, our God, is immensely effective. This year, over Easter weekend, 1,100 people were baptized into the family of faith. “It was the most amazingly beautiful thing I’ve ever seen: People [were] literally going to a river that used to bring them death and experiencing new life, eternal life, through baptism in that same river that they no longer drink from.”

Clearly the clean water is not just meeting physical needs. “There are all these benefits, the ripple effects of clean water,” Derilek says. They are now seeing third-generation churches. This is where natives starts their own church after visiting a missionary church, and somebody who visited the African church starts another in their own village. “This program in Burkina Faso is a great example of how Living Water loves to partner with the church, which is what we have a passion for.”

When the three missionary families chose the Dagara people to spread the Gospel, they found a receptive audience indeed. Derilek speaks to the profundity of what’s happened there: “I’ve been in [mission] circles my entire career. I’ve never seen anything quite like what we’re seeing in Burkina Faso. It is just amazing.”

Derilek urges you to go to the Living Water Website and check out their video about Burkina Faso. He challenges you to watch it and see if you aren’t moved.

To view the video and support LWI, click here.

“This is more than a humanitarian organization; this is the church doing what the church is intended to do. So I just want to express my gratitude to anybody that would even come along and give a look at what another part of the Body of Christ is doing.”