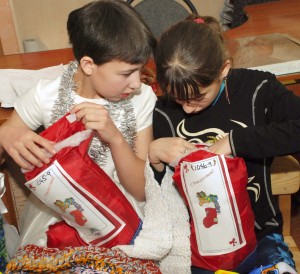 Russia (MNN) — Stockings are part of Christmas, but do you know how that tradition got started?

Every culture has its own explanation, but here’s one that generally seems to ring true everywhere:

In the 12th Century, nuns, inspired by the legend of St Nicholas–who gave gold to the poor–began leaving stockings full of fruit, including tangerines, and nuts at the houses of poor people. The toe of the stocking would contain an apple for good health and the heel a tangerine because they were very rare and expensive.

The thinking behind that tradition still rings true today. SOAR International Ministries joined Russia Inland Mission to create the “Stuff a Stocking” project, aimed at reaching out to one child at a time.

SOAR’s Greg Mangione explains that this project is a kind of “seed” project: an opportunity to give some credibility and strength to the Church. “Together with those churches and ministry partners, visit orphanages that would invite us to give the Gospel message and these gift-filled stockings to the orphan children and at-risk children over there in Russia.”

Across Russia, millions of children are in crisis, lacking hope and having never heard of the Lord Jesus Christ. Participants have a chance to provide something that many of these kids don’t have: hope. A personal touch goes a long way. “We ask every donor to write a personal letter, and ideally, include a picture. On the back of this letter form that we provide is the Gospel message written in Russian.”

When the children receive their stockings, there’s always excitement, but sometimes, Mangione notes, there’s more. “We have had instances where a child has been talking with one of the team members, looking through the letter, looking through the Bible, and something stands out to them, and they start asking questions, and that leads to salvation.”

Magnione explains that the “Stuff a Stocking” project came about in 2001 because it was getting harder and harder to deal with government red tape involved in importing gifts and aid into Russia. “Instead of bringing gifts over to Russia from the U.S. and other Western countries as imported humanitarian aid, we would get together donors and people interested in the project from here, bring the funds over into Russia, and work with local Russian churches and ministry partners to put together the gifts there, in Russia.” This solution not only thrilled Russian believers but also received the praise of many Russian government officials. 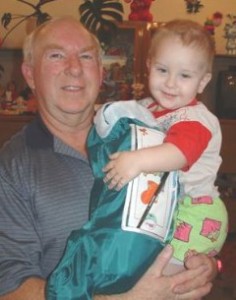 It’s a unique opportunity to make a difference in the life of a child in Russia. “We ask $35 to stuff a stocking and then another $5 to add a Children’s Bible,” says Mangione, adding that there are donors who feel the Bible component is so important, they often fund several other stockings’ Bibles. Each child then not only gets God’s Word, but also toys, supplies, candy and the realization that someone, somewhere is praying specifically for him (or her).

Mangione adds that with the growth of the project, they have another challenge: they’re having a hard time with the quantity of stockings they need. Recently, “We’ve offered people that sew the stocking patterns, and then we can bring those over throughout the year as we make trips over to be used for the following year’s stocking trip.” This project is very popular with ladies’ sewing circles in participating churches. How many do they need? He estimates, “I’d say this year, a goal of 2500 stockings would be ideal.”

You can pray, give, or go. If you decide to give, your stocking will bring joy to those who have no hope, plant seeds of faith, and show them God’s love in a tangible way.

If you choose to pray, pray that hearts in Russia will be prepared to hear the Gospel. Pray that many stockings will be sponsored so that many children will be reached with the Gospel and these special gifts.to provide people to go on the Stuff a Stocking trip in January.

And if you want to go, ask God to provide people to go on the Stuff a Stocking trip in January. Pray that He will provide funding for those who wish to go on the trip. Here’s a link to check out the details of the trip.