Hindu Nationalists gain power, Christians are not backing down 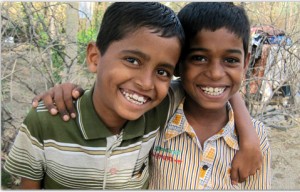 India (MNN) — The most violent acts of opposition to the Gospel are usually indicators of its great success. This is certainly the case in India today.

Dave Stravers of Grand Rapids, Michigan-based Mission India recently returned from a trip to India. What he saw was disturbing, but not without hope that real Kingdom work is being done there.

Stravers was in India for a conference of about 1700 Christian workers from various states of India. The goal was to celebrate the progress of their work, be inspired, and to discuss realities of the future.

After the conference, one of those future realities was highlighted: the Hindu leadership in India.

Stravers says, “There were state-wide elections in three of the biggest states of India: Rajasthan, Madhya Pradesh, and Chhattisgarh, and in every place the most radical Hindu parties have won those elections.”

The three states he mentions either have anti-conversion laws in place, or are working toward them. With the election of Hindu leaders, the violent acts that take place on a regular basis against Christians and Muslims are implicitly supported.

Stravers explains that this violence was evident at the conference. “A number of people present had personally been thrown in prison, or beaten up, or had their lives threatened.” During the Conference, they viewed a video tape of Hindus beating two Christians to death while policemen watched. Copies of the video were previously distributed to Christians as a warning.

The implications of these elections don’t stop at the state level, however. “People are saying this bodes ill for the national elections in India next year,” Stravers states.

One of Mission India’s prominent partners in India says that he expects a similar outcome for the elections coming up this spring.

As more and more Hindus become leaders in India, Christians expect to see a strong turn in favor of Hindu Nationalists. This movement opposes anything that is not Hindu, namely Christianity and Islam.

The future Prime Minister is the current leader of Gujarat. For the past 20 years, he’s had no qualms about expressing his hatred toward anything that opposes Hinduism. His state has one of the most severe anti-conversion laws in India.

Some people are predicting that by next year, there will be an anti-conversion law imposed nation-wide.

This could certainly intimidate Christians, as well as harm the spread of the Gospel.

Stravers is able to look at the condition of India with hope, however. He says, “I’m very optimistic that this is just one more sign that the spiritual battle that’s raging in India is being won by Jesus.”

In fact, Mission India has seen no shortage of evidence that God is working in India. “The Gospel is progressing in India. It’s never been so open. People are coming to Christ in places that haven’t been touched by the Gospel for 2000 years.” Even in Gujarat, converts are baptized by the thousands. Last year alone, Mission India knows of 1 million individuals who gave their life to Christ.

Putting this progress up against the growing Hindu leadership, Stravers offers some insight: “It’s very important to understand that the anti-conversion laws are the reaction to the great response to the Gospel. 95% of the population is open to Christ, open to hearing, open to believing, eager to see their prayers answered, and open to Jesus. So it really is a very small minority that is opposing what’s happening. But these people have political power, and they also are not afraid to use violence.”

Regarding workers of Mission India, things are looking positive. “They’re still passionate, they’re still inspired, they’re still willing to work, and the people who are hearing the Gospel are still coming to Christ.” Stravers is excited about the fruits of their uninhibited labor: “We actually are seeing not only Hindus but Muslims also coming to Christ by the thousands, and we’re teaching [discipleship] skills, and also teaching people how to deal with persecution when it arises.” Some of their work in India includes church planting, teaching literacy, and witnessing to children in after-school clubs.

“Ironically, in this persecution environment, it’s the children who seem to have the most powerful witness to parents and to community leaders,” Stravers says.

Stravers asks that you pray for protection and encouragement for their team and for the Christians in India. “Satan’s tactic is to strike fear into the hearts of people. The theme of our conference was actually ‘be strong, be courageous, do not be terrified, do not be discouraged,’ taken from Joshua chapter one. And that is the message that India’s Christians leaders are encouraging each other with.”

You can help support them by visiting their the Mission India Web site. Also, for the month of December, gifts to their children’s after-school ministry being matched dollar for dollar. It only takes $1.00 to send one child to Bible club.