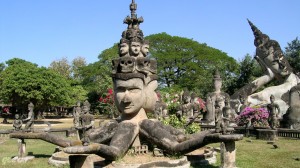 Laos (CAM) — Another threat of forcible removal looms large for a group of Christian villagers in rural Laos, this time in the Savannakhet province of the country.

Five families living in the village of Natahall in the Phin district received an eviction notice December 2, according to an e-mail from a ministry in Laos. “They received the expulsion order because they have embraced the Christian faith,” stated the ministry representative. “The authorities consider the embracing of the Christian faith contrary to local beliefs and customs.

“The chief of Natahall village, along with the village elders, continues to try to force our five Christian families to recant of their Christian faith after our Christians refused to abandon their religious beliefs,” wrote the Lao ministry leader. “The authorities threatened that if they insist on embracing the Christian faith, they will be held responsible for any death in the village because the village chief and village elders maintain that believing in God violates the village’s longstanding beliefs and customs in the spirits.”

Entrenched in traditional animist beliefs, many rural villages in Laos view Christianity as a western religion that threatens their culture. Despite resistance, missionaries from the ministry have made some progress in changing that perspective as Laotians discover God’s gift of salvation is for every tribe and nation. One of the newest churches planted by the ministry was in the Natahall area.

The ministry leader requests prayer that these five families will be permitted to remain in their homes and be a witness for Christ to their neighbors and to the village authorities. “The village chief has issued legal documents to relocate the Christian believers to other areas. We are still working with these believers,” he said.

A similar incident occurred in late August when leaders of another Lao village ordered 11 families comprising 50 individuals to abandon their Christian faith or face eviction. The new believers were charged with following “the religion of a foreign Western power.”

Christian Aid Mission reported a case in February in which a couple in their 50s was evicted from their home village when they converted to Christianity.

As families face these hardships, pray that they will stand strong in their faith.

Taking the ‘next steps’ in La Gonave