Guatemala (MNN) — Guatemalans displaced by the country’s vicious civil war are still battling their government for a place to call home.

Armed conflict started in 1962, and government forces began using violence to suppress insurgents during the 1970s. This resulted in a death toll of at least 50,000 over the span of a decade, according to the BBC. 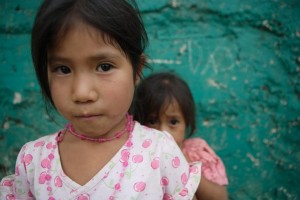 “Many of the people were displaced, either into the city or into other countries surrounding Guatemala,” adds Dan Smith of Paradise Bound Ministries.

When the civil war ended in 1996, around 200,000 people had been killed. Those who survived are now petitioning Guatemala’s government for ownership of abandoned properties and plantations.

Smith says the process takes about 10 years of “paperwork and red tape.” But persistence paid off for a group of families in a mountainous region of Guatemala.

“In this particular case, there [are] 60 families who were able to come together, solicit this from the government, and they were awarded this plantation,” explains Smith.

While getting the land was a victory, “that’s all they get; there’s no electricity, there’s no running water, there’s nothing. They just have a place they can live and begin to cultivate their crops,” Smith explains.

“It’s a tremendous opportunity for us to come in and take care of their physical needs, thus earning an opportunity to share the Gospel with them.”

“We really kind of stumbled up on it or, if you will, God led us to this village when one of our Guatemalan staff was out investigating for villages that we could do medical clinic and outreaches in,” says Smith.

“There’s really not much of a road going back here; in fact, we can only get to the village in the dry season.” 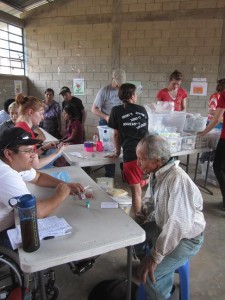 Smith says MNN’s coverage of the trip garnered prayer support, which helped open doors for them to share the Gospel. After a team from Michigan cared for physical ailments through mobile medical clinics, they showed The JESUS Film and one of the Guatemalan team members shared the Gospel.

“God really opened up their hearts, and through that, we saw many people come to know Jesus Christ that night,” says Smith. “Our discipleship team has been in since and been doing some work, and now we’re poised to take this another step.”

Paradise Bound has been asking the Lord how they should serve in San Ramón on the January trip, and “God put it in our hearts that we do need to build homes for the people here.

“Many of them are living in shacks that are just simply built out of sticks, with plastic for their roofs,” says Smith.

From January 14 through 21, a short-term missions team will be building homes for the villagers of San Ramón. Since the village is so far from Paradise Bound’s Guatemalan ministry center, where short-term teams normally stay, the team will be staying in.

Staying in San Ramón instead of the ministry center will help deepen relationships between villagers and the team, a crucial component of Paradise Bound’s ministry.

“We can spend more time with the families, more time in the village; again, just earning their respect, knowing that we’re there out of love,” Smith explains.

Want to help them on their journey? Pray.

“If we’re not just covered in prayer, all these plans that we have will really amount to nothing,” says Smith.

Pray that teams heading to San Ramón in January will have safe travels. Pray for villagers to be open to the Gospel of Jesus Christ

“We just need prayer against the enemy’s movements; we need prayer for the teams that are coming down.”

Planting seeds to reap a harvest

During the first three months of 2014, a total of eight teams from the U.S. will visit the remote village of San Ramón. Each team is bringing a solution for physical needs and adding another layer to villagers’ spiritual growth.

When the short-term missionaries are done, Paradise Bound’s Guatemalan team picks up the next phase: discipleship.

Each week, team members will travel to homes built by the short-termers to meet with San Ramón families. They’ll share more of God’s Word and disciple new believers. For families or individuals who are still resistant to the Gospel, further evangelism may be required.

“As we share our hearts and share time with them, a small group will begin to form that then ask us, ‘How can we further worship our Lord as a unit?'” says Smith.

To start the church-planting process, Paradise Bound will plant a Guatemalan pastor in the village. As new believers grow and mature in their faith, they’ll gradually take more and more ownership.

“Over the course of three to five years, we would train others in that village to become the lay pastors there, and turn it completely back over to them again.”

You can get the latest San Ramón updates by signing up for Paradise Bound e-mails here.

“Our teams are already full for 2014, but if someone has interest in joining a team for 2015…they should let us know,” Smith says.