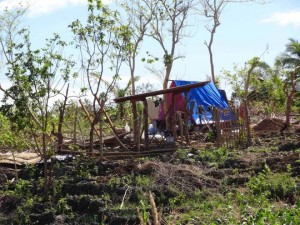 USA (MNN) — A month has passed in the wake of Typhoon Haiyan, and some islands of the Philippines are still waiting to receive aid. The death toll continues to rise, yet U.S. interest is fading.

While the U.S. leads the disaster relief effort financially, most Americans have stopped following the events going on now. According to last month’s Pew Research study, less than 14% of U.S. adults reported contributing to the relief effort, and less than a third were still watching for updates.

Jeff Palmer of Baptist Global Response says they’re seeing something different on-the-ground, however. “Actually, we’re having some good response: good things are going on,” he states.

According to Palmer, the media has begun to pull out of the area. This will cause the awareness of conditions to decrease, but BGR is not worried. “The needs are huge, and they’re still ongoing. We at Baptist Global Response…are seeing a great response happening.”

Initial donations were substantial, though they will be spent quickly. However, BGR has many teams mobilized, and support is coming in from around the world. Partners from both the Philippines and America have joined BGR in aiding people whose homes have been demolished.

“One of the things that’s interesting is that this disaster, Typhoon Haiyan, was widespread; it was huge,” notes Palmer.

“The areas that you’ve seen on the news are just small areas compared to the overall area of the Philippines that has been hit. There are five major regions affected.”

BGR responders are settling into different areas, seeking to reach even the most remote areas affected by the storm.

“We’re still finding islands in areas that nobody has made it to. It’s just unbelievable, a month after the event. But you have to understand: this was a huge storm, a huge area.”

Palmer says the islands are often small and isolated, and transportation between them remains difficult. But where teams are stationed, immediate needs of Filipinos are being met.

“Actually the food situation in most of the places is pretty good,” Palmer says, “Water is an issue, but on those islands, water is always an issue. The health care issues are actually more preexisting conditions. The big issue right now is housing.”

Over 600,000 people have been displaced from their homes, and some houses having been wiped away completely.

Palmer is encouraged by the level of involvement on-the-ground. Progress is being made steadily. He recognizes that the rebuilding period could last around three years. But right now, involvement is sufficient. “What will concern me is: after five-six months to a year, what will it look like?”

Christ calls His followers to help the needy. The seemingly apathetic response to this disaster, as portrayed by the Pew Research findings, should concern Christians but also motivate them to pray and to reach out with the resources they have. One area of prayer involves the Great Commission.

Palmer says Haiyan’s wrath is opening doors to communities that were previously closed to the Gospel.

“It’s been a great way to show compassion and get an audience with people who are desperate to hear a word of hope,” he states.

If you feel led to contribute to the effort going on in the Philippines, or if you would like to be more involved, follow this link.