Ukraine (MNN) — Rumors of force by riot police are circulating the city of Kiev, Ukraine, as protestors continue seeking the resignation of President Viktor Yanukovych. Yesterday, a European Union official says Ukraine still intends on signing an association pact. Failure to do so was, in part, the reason for the protests which has seen hundreds of thousands of people in the streets of Kiev.

Now, however, Christians believe the country could be poised for a spiritual renewal. 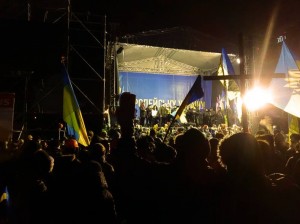 Amy Richey is with EFCA ReachGlobal in Ukraine. She says a prayer tent has been erected in the center of the protests. “The pastor who is the head of the church that I attend in Kiev, and the associate pastor as well, are both talking with people. They’re telling [Christians] to come out and talk with people because there’s such a spiritual openness right now in Ukraine.”

While Richey is encouraged that Ukrainian Christians are getting involved in the political systems, “I’m even more excited about the opportunity for a real spiritual awaking in Ukraine and just to see the hunger and hear stories.”

Richey tells a story of one young man who was in the city square when riot police were tearing down the barricades. They were making their way closer to the stage when the bells of St. Michael’s Church started ringing as a cry for help. As people prayed, this young man said something happened in the heavens because the police started moving back. He said it was at that point he believed in God.

Those kinds of stories abound.

Richey says people can’t rely on government or anything earthly. They can only trust in Christ alone. “We need an eternal hope. So I’m praying for safety, no bloodshed, and I’m praying for a spiritual awakening in Ukraine.” She’s also asking you to pray for unity in the body of Christ.

Funding is need for EFCA ReachGlobal’s efforts to provide tea and literature for protestors, the people they’re serving. Go to http://www.EFCA.org. Click on “Give” and in the giving code field, enter 6822.

Hindu Nationalists gain power, Christians are not backing down

Hindu Nationalists gain power, Christians are not backing down
Get the latest news directly to your inbox Subscribe