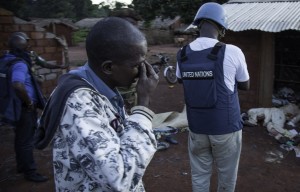 A 1,600-strong French force was sent into the CAR, deployed after days of communal fighting claimed 400 lives.  The landlocked country has been in turmoil since March when Seleka rebels seized power from then-president Francois Bozize.

Volatility has been the main component of the new regime. Shortly before the arrival of the French troops, the flare-up caused another wave of refugees. According to the United Nations, an estimated 60,000 people fled their homes and sought refuge in approximately 20 IDP sites according to data collected by UN agencies in Bangui.

Others (many of them Christians) fled to the airport. On Saturday, the International Committee of the Red Cross reported that the population at the airport tripled from 5000 to 15,000. 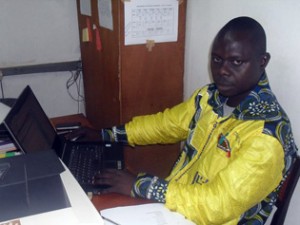 “His name was Elisee Zama, and he was a translator with  ACATBA (Association Centrafricaine pour la Traduction de la Bible et l’Alphabétisation). That is a Wycliffe partner organization there. He was in the capital city of Bangui and was trying to get his family to some safety in the midst of some pretty violent fighting. He was shot and killed.”

The regional director of Wycliffe’s main partner organization, SIL, reported that the situation in Bangui is still very tense.  “Reprisals against Christians in particular in Bangui are of great concern,” said Larry Robbins.

“There have been…reprisals in certain neighborhoods of Bangui, resulting in thousands seeking refuge on the airstrip of the international airport.

“Our SIL colleagues report a quieter night. They remain within the security of the School of Theology compound until further notice. There are French patrols now in evidence. We are grateful for the unanimous passing of a UN resolution which gives the French troops a mandate to take appropriate force to protect the civilian population and it appears that this has had an immediate effect.”

Aside from obvious indicators like crosses or clothing,  how did the rebels know who to target? Creson shares his thoughts: “Most people in that part of the world don’t try to hide their faith. There’s a level of religious freedom, in a sense, where they’re able to share their faith openly, so I think that this level of persecution may be something that is new.”

Robbins requests prayer for Zama’s widow and three young children, and for ACATBA leaders as they move forward. The family was able to retrieve and inter Zama’s remains over the weekend. The struggle is just beginning for the survivors. “Pray for his widow. They have three young children. I think, too, that we can just pray for peace.”

The translation project also faces a setback with Zama’s death, adds Creson.  “Whenever you lose an experienced translator, it’s a challenge because there’s been a fair amount of training, education, orientation, that has gone into helping translators get to the point where they’re translating clearly, naturally and accurately.”

Even as the community mourns, Creson says believers are still hopeful. “What God often does: He will raise up someone else who can be a part of it. Almost all of these partners are working closely with other partners on the ground.”

Pray for safety. The translation team has been dealt a hard blow, but it’s not the first. According to the ACATBA Web site, Zama is the second of the group’s translators to die in the Central African Republic in the past two months; the first translator’s name was not given. 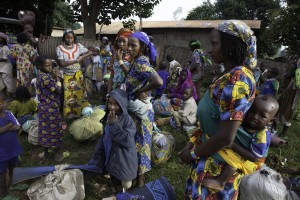 What can be done? As the troops mop up operations and try to restore order in CAR, believers are asking for prayer. Creson says, “We can pray that the church would know how to be the Church. In the midst of very difficult and challenging circumstances, how do you reach out to people that hate you? How do you minister to people that are  in need?”

Pray for Elisee’s family as they grieve, and also for the leadership of ACATBA as they handle this difficult situation in the midst of heightened insecurity. Pray, too for God’s protection over all ACATBA staff, as there is concern that the insecurity may degenerate into a religious conflict.

Relief continues in the Philippines